The articles published on the New Fascism Syllabus website are intended to foster scholarly inquiry and enrich discussions and debates of topics thematically related to our project. The views expressed in the articles published here do not necessarily represent the views of the Editorial Board or its individual members.

Occasionally, we will feature new publications on themes related to the New Fascism Syllabus. Here, Lucie Fremlova provides the first detailed study of queer Roma, who continue to face discrimination both under authoritarian and liberal regimes. You can order a hardback copy for your university library here. The book is available for free as an e-book. 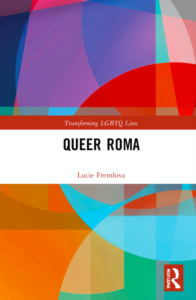 Queer Roma was published a year ago by Routledge. This book offers in-depth insight into the lives of queer Roma, thus providing rich evidence for the heterogeneity of the Roma people. The lived experiences of queer Roma, which are very diverse regionally and otherwise, pose a fundamental challenge to one-dimensional, negative misrepresentations of Roma as homophobic and antithetical to European and Western modernity. The book platforms Romani agency and voices in a new and original way. This enables the reader to acquaint themselves with the individuals behind the data, who tell stories of rejection and acceptance by Romani, as well as non-Romani, families and communities. Combining intersectionality with queer theory innovatively and applying it to Romani Studies, the author supports her arguments with data illustrating how the identities of queer Roma are shaped by antigypsyism and its intersections with homophobia, transphobia and other forms of oppression.

Historically, there has been an often-unacknowledged proximity between Roma and lesbian, gay, bi, trans, intersex and queer (LGBTIQ) people, reflected not just in a social, but also a linguistic affinity between queer argots such as Polari used by gay men and drag queens in the United Kingdom (UK) or Lubunca and Kaliardà used by LGBTIQ communities in Turkey and Greece, respectively. Apart from borrowing from other languages, these queer argots both use elements of the Romani language. Despite this queer-Roma proximity, grounded in common experiences of stigmatisation and persecution of both groups discussed in Chapter 2, until very recently, queer Roma were not visible; or certainly not as visible as has been the case over the past decade. During this time, a discernible LGBTIQ Roma movement has emerged and mobilised across Europe. As this book will show, contrary to so-called popular beliefs and opinions, Roma of minority sexual and gender identities, who identify as queer, have always been present within the social matrix of the various subgroups and in all walks of life. And not just that: the rich, multi-faceted lived experiences of queer Roma presented in this book dispel myths about the presumed compulsory heterosexuality, homophobia and sexual backwardness of Roma.

Chapter 1, “Understanding Romani Identities beyond Ethnic and Binary Frames,” is the longest chapter, which provides the theoretical and methodological backbone of the book. It discusses understandings of Romani identity in Romani Studies scholarship. The chapter discusses the relevance of concepts emanating from queer theory and queer of colour critique to conceptualisations of ethnic/“racial,” sexual and gender identities.

Chapter 2, “‘Perverse’ and ‘Deviant’ Queer Sexualities, Genders, Ethnicities and ‘Racialities’,” expands on the notion that certain types of non-normative ethnic/“racial” identities—for example, Black, Romani, Jewish—as well as sexual and gender identities-includinglesbian, gay, bi, transgender, intersex—have come to be seen as perverse, pathological, deviant, abject, and socially stigmatising markers for their bearers. It examines the construction of gendered and sexed, or sexualised, ethnicities/“racialities,” as well as the construction of ethnicised and “raced,” or “racialised,” sexual and gender identities. The chapter explores what are, within the European context, often considered two of the most stigmatised and pathologised collective social, ethnic/“racial,” sexual and gender identities—Roma, queer and their intersections of queer Romani identities. Just as non-normative sexualities and gender identities are often closets for queer people, Romani identity has become a kind of ethnic/“racial” closet due to being a negative, socially stigmatising marker for many Roma. Using a very diverse pool of rich empirical evidence, Chapter 3, “We’re Here, We’re Roma and Queer!,” considers how the intersectional experiences of queer Roma are informed and shaped by different relations, contexts and material realities. The chapter goes on to examine the lived experiences of queer Roma at the intersection of antigypsyism, homophobia, lesbophobia, transphobia, sexism and other forms of oppression. It goes on to look at how the lived experiences of queer Roma are shaped through family and communities. The chapter explores the role that gender plays in relation to the societal position of women, men and transgender Roma, particularly in terms of the asymmetrical power relations impacting the position of Romani lesbian women, Romani gay men and bi and transgender Roma. Gender identity is considered with respect to the ways in which some transgender Roma are ethnicised/“racialised,” sexed and gendered as opposed to cisgender Roma and non-Roma. The chapter goes on to consider ethnic/“racial” and queer visibility, invisibility and hyper-visibility.

Chapter Four, “Visibility in Spaces between Difference and Sameness,” explores the lived experiences of queer Roma vis-à-vis different degrees of ethnic/“racial” and queer visibility, including invisibility and hyper-visibility; their links to acceptance—or lack thereof; and being located within and in between sets of social relations and contexts. It considers passing, the ethnic/“racial” closet and the queer closet resulting from various degrees of ethnicised, “racialised,” sexed and gendered visibility as strategies responding to and protecting their queer Roma users from antigypsyism, homophobia, transphobia, sexism and intersectional oppression. It also demonstrates how as mediators, bridges and in-betweens, some queer Roma seek to create commonality, and indeed, strategic sameness—a conscious, strategic, subversive take on passing as non-Roma and straight—in order to unsettle and challenge essentialist notions of ethnic/“racial,” sexual and gender “difference.” Finally, the chapter considers the notion that specific spaces which empower queer Roma to live and enact their intersecting ethnic/“racial” and queer identities are vital to being seen, heard, understood, and feeling emotionally safe.

Chapter Five, “Queer Belonging,” explores the notion of queer belonging as a non-normative positionality vis-à-vis the queer intersectional specificity that queer Roma experience due to possessing negatively valued, stigmatised, pathologised and often hyper-visible ethnic/“racial,” sexual and gender identities. This has consequences for queer Roma’s sense of belonging to majority white-normative, heteronormative, and cisnormative societies, as well as Romani and LGBTIQ communities. Queer (non-normative) belonging in turn impacts on the identifications and disidentifications made. Queer Roma may identify with certain aspects of ethnic/“racial,” sexual, and gender identities while disidentifying with dominant socio-cultural scripts values and norms that are hostile or oppressive. The chapter discusses how queer belonging epitomises a strategic response to the “queer identity dilemma.”

Chapter Six, “Towards Non-Stereotypical Understandings of Romani Identities,” the concluding chapter, summarises key milestones in understanding Romani identities; and those understandings which are engendered by the lived experiences of queer Roma, facilitated by the concept of queer intersectionalities. These understandings unsettle and challenge persisting dominant, essentializing conceptualizations of Romani identities at the core of stereotypical representations of Roma that are generated, used, and maintained most often by non-Roma. The chapter also considers the importance of innovative methods in conducting impactful transdisciplinary research at the interface between community organising, activism, policy, and academic scholarship; co-producing knowledge that brings about social change; and the heterogeneity and plurality inherent to the lived experiences and visual self-representations of queer Roma. Contemplating the use of strategic essentialism and queer intersectional feminism in social movements, the book concludes by reflecting on possible future directions for the Roma rights movement.

Lucie Fremlova received her doctorate from the University of Brighton and is currently an independent social scientist specialising in ethnicity/race, sexuality and gender